Fall and Winter Snacks to Try in Korea

by Yejun Choi
in Food & Drink

Here are some of the most commonly enjoyed fall and winter snacks that you must try while in Korea. They are not only delicious but will keep you warm too!

Many of the fruits grow completely ripened in the fall. Autumn fruits in Korea include apple, pear, and persimmon.

Because Koreans like fruits as a dessert, they tend to prioritize sweetness when selecting a fruit. Fruits savored in the fall are not only tasty but also nutrient-dense. The Korean pear is sweet and crisp, with a somewhat sour aftertaste.

Korean sweet potatoes are significantly sweeter than those in North America and when roasted to golden perfection. Whether roasted on a fire or in specialist sweet potato roasters sold on the street, this Korean food is a must-try! This is still a great snack to keep you warm as the weather cools.

Roasted chestnuts, like sweet potatoes, are offered as street food in Korea during the fall/winter season. Although December is the greatest month for them, it’s never too early to eat and relish these lovely tiny pearls. Like the sweet potato, Korea has special chestnut roasters that pepper the streets of Korea, delivering these presents to the chilly onlooker. 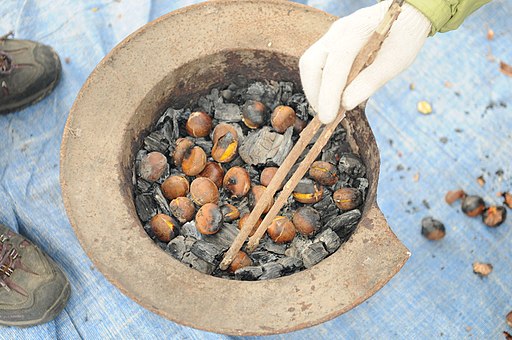 Dried persimmons are popular throughout Eastern Asia. They are made by drying unripe persimmons, making them sweet, chewy, and almost like candy.

If you appreciate the creamy, savory flavor of female crab roe, fall is the finest time to eat it. It is one of the best fall and winter snacks in Korea as the shell is completely loaded with ample meat and creamy roe.

Blue crabs are prepared in a variety of ways in Korea. Even when simply steamed, fall crabs are delicious, but the rich flavor of crab Jjigae’s stock is worth a try. If you want to elevate your Korean culinary experience, try Gejang, which is produced by marinating fresh raw crabs in either soy sauce or a sweet and spicy chili pepper sauce.

Koreans flock to street food stalls to warm their shivering bodies when the weather turns colder in Korea. What better way to warm up than with fishcake soup? People walking by are drawn in by the steam from the soups on the food carts, and when they taste the broth, they can feel the hot soup slither down their throats, warming up their bodies and preparing them for the coldness of fall.

According to a common Korean saying, “the smell of grilling fall gizzard shads returns an escaping daughter-in-law.” When the weather begins to cool significantly, the fish stockpile lots of nutrition for the upcoming winter season. Because of this, its flavor becomes bolder and richer.

Grilling the fish whole is the best way to eat it. Healthy fish oils are well-preserved, resulting in a luscious texture and a rich flavor. Fresh gizzard shads are also delicious as sashimi.

Another seafood that tastes best in October is the prawn. From September through December, prawns are filled with succulent meat and relished in a variety of ways, such as grilled over top of a bed of salts, to mention one.

You can find the freshest prawns ready to eat in port cities like Incheon and Busan. Some street food vendors make them whole and deep-fry them, which is only accessible when they are fresh.

This goldfish-shaped nibble, literally “carp bread,” is very probably the most popular winter snack item in Korea. When you bite into it, you’ll realize it’s actually flour loaded with red bean paste and grilled to a lovely brown.

The crispy exterior layer and moderately sweet inside filling will not disappoint. It’s also relatively cheap and can be purchased in groups of three to five for roughly KRW 2,000.  Gukhwappang is also available, which is the same thing but is smaller in size and round.

The dough is rolled into a ball, filled with dainties such as honey, brown sugar, chopped peanuts, and cinnamon, and then fried up on the skillet in front of you. Be careful, though – the gooey syrup is extremely sticky and has a nasty habit of dripping out of the Hotteok and onto clothing, cameras, and other vulnerable items. It is also one of the favorite Korean street food dishes so you’re bound to see long queues for it.

The Trendiest and Most Brewtiful Cafes in Seoul

All You Need To Know About Yeongwol Yemil Wine Village