A Visit to Myeongdong Cathedral in Seoul

by Anyaa M
in Attractions

Myeongdong Cathedral is a hidden gem in the heart of Seoul- and it’s positively gorgeous. The perfect place to escape the hustle and bustle of city life if you’re looking for a beautiful and peaceful getaway!

Myeongdong Cathedral is a renowned central tourist destination in downtown Seoul for its elegant architecture and rich history. It was Korea’s first-ever Roman Catholic Church and Gothic building, making it all the more interesting to visit. 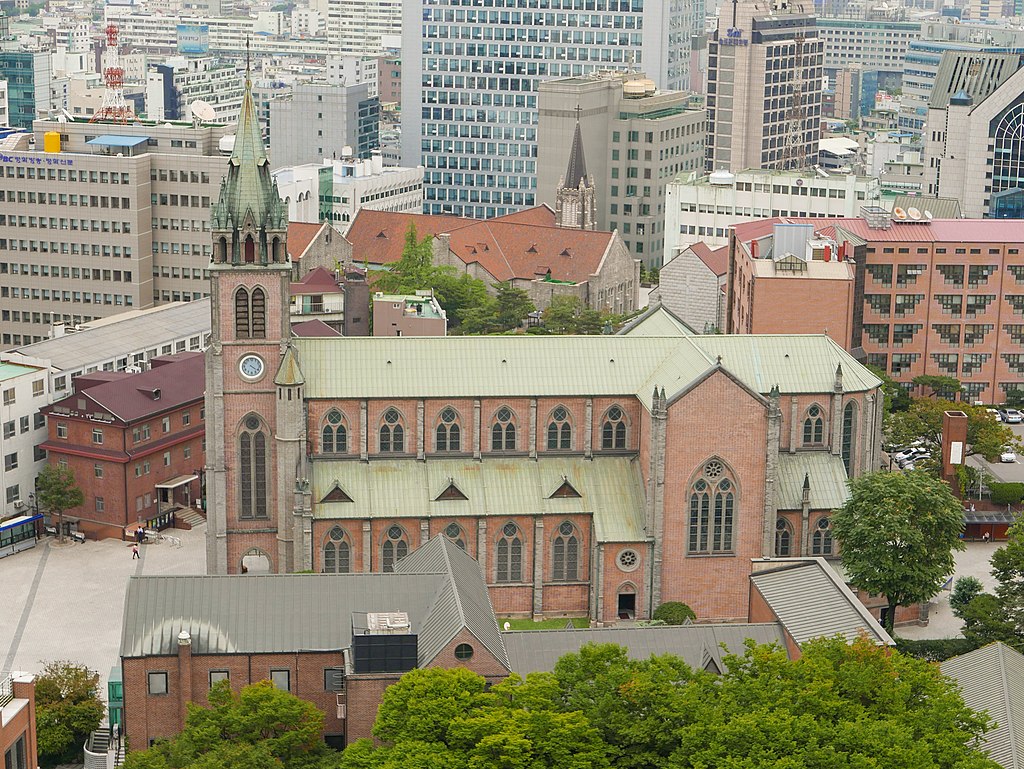 How to get there?

There are several ways to arrive at the Myeongdong Cathedral. The best way is by taking the Seoul Subway Line 4 and getting off at Myeong-dong Station (Exit #09). Once you’re out of the station, walk for about 70 meters, then turn left on the first alley. You should see the Cathedral right in front of you!

If you would rather, you can take Subway Line 2 to Euljiro 1 (il)-ga Station and exit at number 5.

The easiest way to get to the Cathedral is by taking Subway Line 2 and getting off at Euljiro 3 (sam)-ga Station. Be sure to use Exit number 12.

The church is usually open, except for Mondays. You can enter the Cathedral from the first alley on your left. There is an underground complex that leads to the Cathedral garden.

You must go through several levels to reach the designated historical site, number 258. The trip begins at the basement level. As you go further, you’ll see several shrines surrounding the relics of martyrs from the past.

Myeongdong Cathedral is a symbol not just of Christianity but of Korea itself. The country’s first and most important Catholic church takes its official name from the Virgin Mary of the Immaculate Conception.

In 1784, people began gathering at this spot to express their religious views. The area was previously known as Myeongnaebang.

A new and permanent church was built using red and grey bricks by Chinese bricklayers in 1894. King Gojong, the sixth and last king of Korea’s Joseon Dynasty and its first emperor, laid the cornerstone. The Cathedral, designed by French missionaries, has a Gothic style.

Bishop Edouard founded the Cathedral on December 4, 1884. Our Lady of the Immaculate Conception Cathedral was its name from the end of World War II until May 29, 1898. It became Myeongdong Cathedral after the war.

The Cathedral is still a hotspot for protesters because the government has been lax in arresting them due to the holy ground status of the property. However, after a violent protest ensued in 2000 between telecommunications labor unions and female churchgoers that resulted in Church property being vandalized, The Cathedral banned any protesters who did not have prior approval from protesting.

The Cathedral also has a variety of services, including the Holy Mass, for tourists on Sunday mornings.

First and foremost, as you go through the entrance, you will see a stunning statue. The gardens are home to the renowned ‘Statue of Our Lady.’ It’s surrounded by lush vegetation. Don’t forget about all of the brilliant blooms! This makes it a point of interest, thanks to its vibrant hues.

In addition, these structures commemorate the individuals who dedicated their lives to Catholicism. Right nearby the location, visitors can see Seongmo Dongsan. This is more commonly known as St. Mary’s garden.

As you walk in, you can see the high ceilings. There are beautiful stained glass windows that will catch your attention. The light shines through most perfectly. It creates a heavenly ambiance.

While you’re admiring the windows, take note of the paintings on the walls. They each tell a story. The colors are quite striking, and they will take your breath away.

What to Do at Myeongdong Cathedral?

Now that you know all about the background and architecture, it’s time to learn about the activities here!

Attending mass is one of the most popular things to do. There is an English and Korean version of this program. Starting your day off with this is the perfect way to get the most out of it.

When it comes to relaxing, the gardens are the ideal spot. You can stroll around and take in all of the beauty. Make sure to snap some pictures!

The Cathedral’s Garden is populated with fake white rose blooms that are illuminated. The flowers come to life once the night falls and radiate a spectacle that has never been seen before. That amazing nightscape keeps mesmerizing you repeatedly with each passing second.

This destination always seeks to connect with the global community through prayers and religious outreach programs. The Myeongdong Cathedral is a place of peace and serenity in the bustling city. It’s a must-visit when you’re in Seoul!

Top Places and Attractions to Visit in Pohang

All You Need To Know About Yeouido Hangang Park

Best Places To See Around Haeundae in Busan